Solutions you can use for your gardening problems.

What is an Africanized honey bee?

The Africanized honey bee (AHB) is a cross between an African bee and a Western bee. Both bees are races of the species Apis mellifera and it is not unusual for two races or subspecies of a species to cross breed. Think about the cross of a Poodle and a Labrador. The result is a very cute and desirable puppy. But all cross breeding does not always produce the outcome desired. In the cross between the African and Western bee, the outcome has been very undesirable and has forever changed beekeeping in South America and in the southern United States. 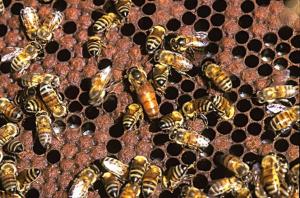 If the Africanized bee is undesirable, how did it come to exist?

In the 1950’s a Brazilian researcher imported 26 African queen bees to Brazil with the belief that he could crossbreed them with the European honey bees used in the beekeeping industry in Brazil and produce a superior race. The African bee evolved in a climate much like the Brazilian climate and he hoped their genetics would strengthen the European bees’ productivity.

One of his observations was that these cross bred colonies were very defensive. Then despite having safeguards in place, an accident released these bees into the environment. Since then, they have mated with the local population and have spread throughout the Americas.

According to Dr. Jamie Ellis, Associate Professor at the Department of Entomology and Nematology at the University of Florida, the AHB is considered to be the most successful invasive species of all times.

What is so undesirable about the Africanized bee?

The most undesirable trait is the defensiveness of the AHB. They are much quicker to go after a perceived threat from further distances than the European honey bee. They will pursue much further and in larger numbers. This characteristic poses a greater threat to unsuspecting individuals than other feral colonies. They also tend to establish colonies in smaller structures and often near homes. Beekeepers have learned to be extra vigilant when attempting to remove colonies from water meters, electrical boxes and other smaller cavities as these small spaces do not appeal to the European bee as much.

One Response to “The Africanized Honey Bee – Part One”